Recently, I completed one of those flights that sits in the bucket list. A visit to Duxford by air. Much like you, I’m sure, you’ve spent many wonderful hours as both a child and an adult, perhaps even now with your own family, exploring the wonderful museum that is Duxford. I have to admit, it was very surreal being on final approach, rolling across that grass runway and taxiing amongst the legends. Something I won’t forget quickly.

Never again will I hear the words “park behind the B-17”!

I have condensed as much information as I can in the hope that you will find it useful in planning your own trip. There are certainly a few things I am including here that would have been useful to know before I departed.

To put it simply – glorious. CAVOK, I could not have asked for better conditions. A cloudless sky, a little hazy but still excellent visibility. It was a bit breezy, generally easterly and the last half of the return flight was marred by frankly relentless and vicious thermals that certainly threw me about. The type of thermals where you were at 1,900 feet then a jolt and suddenly you are at 1,800 feet!

I didn’t want to entertain navigating the quagmire of airspace between Popham and Duxford although there are a few routes through for those more inclined to do so. I did hear several people get zone transitions on several occasions with ease. However, I decided to keep it as easy as possible on the workload and opted to keep my legs to a minimum. 2 in fact. From Popham I was planning on going north to Oxford before making a right and heading direct to Duxford. The route does pass very close to both class D and A airspace at points so I was very conscious on ensuring I was north of the magenta line on my digital map.

From Duxford I planned on doing the same route in entirely the opposite direction.

I was expecting a service from Brize the whole way, but it didn’t turn out like that.

I was also aware, having booked PPR the day before from the telephone briefing I received that there was A LOT going on in the circuit. They had displays, warbirds, turboprops, gas venting in the middle of the downwind leg and strict joining requirements. You must absolutely have a good read of the instructions and briefing available on the website before going. The map of the airfield with holding points was also very useful, especially during the departure.

They don’t generally allow ‘day before’ PPR requests. I called the day before and they said they would make an exception. They said I would have to call back on the day after 10am but I told them I would already be airborne by then, they made the booking for me anyway. However, generally, they only take PPR requests after 10am on the day.

I took from Popham without event and headed north. Once at Newbury I called up Brize for a basic service. It was pretty quiet for them at 10am in the morning and the controller was happy to provide me with traffic information most of the time too.

Once I had turned the corner at Oxford (after trying to spot Tom Hanks at Abingdon) I headed north slightly just missing the Benson MATZ and soon after Brize handed me over to Luton radar. Again, no problem and they were relatively quiet at the time too. I called them up and asked for another basic service.

Once I was just past Henlow airfield I requested a frequency change over to Duxford Information. Which is where the fun began. I was already mentally prepared but my gosh was there a lot happening! There were 3 aircraft in the circuit including a PC12 and just forward and below of me was a biplane, I assumed a Tiger Moth prancing around just outside the ATZ. So I had eyes everywhere! I was watching the circuit, my position and the biplane. The biplane eventually made a straight in approach and landing, I had thought of requesting it but decided I would rather be behind the PC12 rather than in front of it!

I made my way to the south of the Zone to position for the downwind join that Duxford Information had asked me to do. Remember, an aerodrome with ‘information’ in the name, generally, does not control the air but does control the ground movements.

Remembering also that I was asked not to fly over any villages at all, and also avoid the gas venting right in the middle of the downwind leg I found myself trying to figure out that. It was at this point I noticed 3 bright lights ahead of me, same altitude (I was descending to the circuit height of 1,000 feet on the QFE). They were coming towards me and I realised that I had ended up where I didn’t want to be – in front of the PC12! He had clearly avoided the venting by moving his downwind leg several nm to the south which was quite a distance from where I was expecting it to be. None the less, I was clear and I didn’t see him waving any gestures at me!

Spotting an opportunity I made a hasty turn into the downwind leg before the gas venting knowing there was another aircraft on base leg. From there, the remainder of the circuit was normal. I did make a request to use the grass runway rather than hard for the landing. 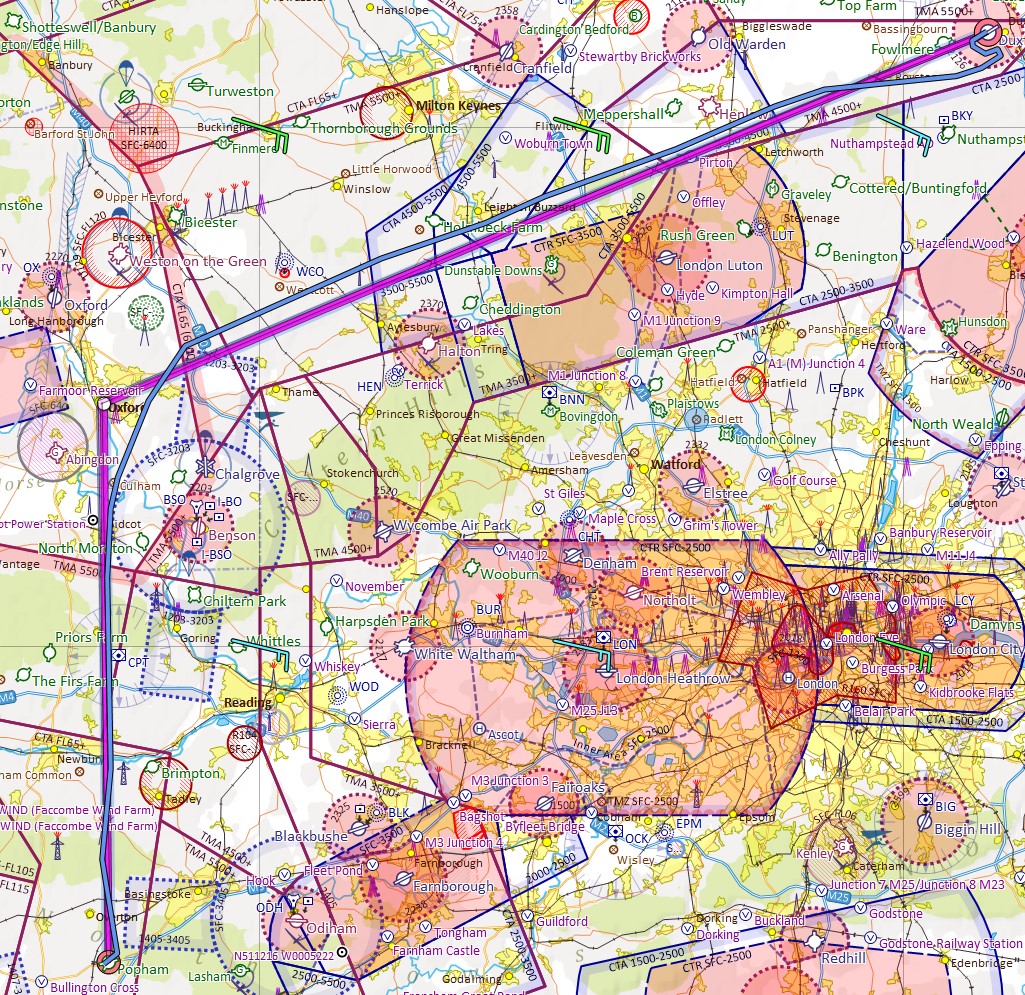 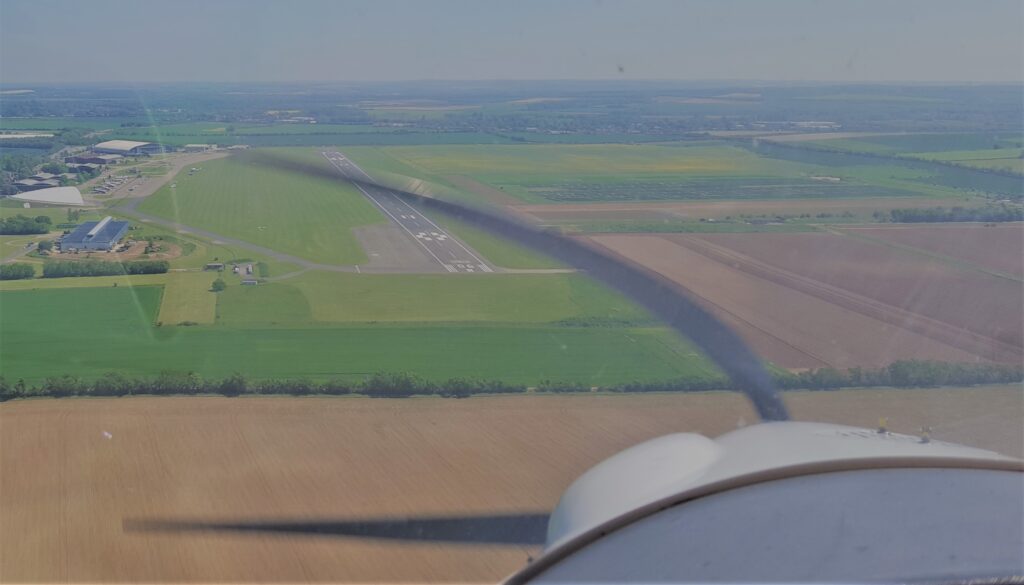 Landing was on 06R onto the grass runway. While on base leg and turning finals a Spitfire took off which was quite a thrill being so close. It rapidly made its way north and was gone like a rocket. Upon landing, I was asked to exit left onto the taxiway. I don’t believe there is a grass taxiway, that’s official anyway, they do mean the concreate one.

It’s here the smile grew on my face and the huge concentration of joining the circuit and landing made way to relief and utter joy looking out across the hundreds of museum visitors watching and thinking how extraordninaty it was to be sitting in an aircraft on the other side of that fence. If only my 10 year old self knew.

And the warbirds and vintage aircraft start to appear, like a guard of honour as you cruise down the taxiway.

Once on the ground, everything is controlled. You are not allowed to move without clearance or permission to do so first. My instructions were ‘onto the taxiway, past the control tower and part behind the B17 next to the PA28’. I don’t know how many more times I will hear that! 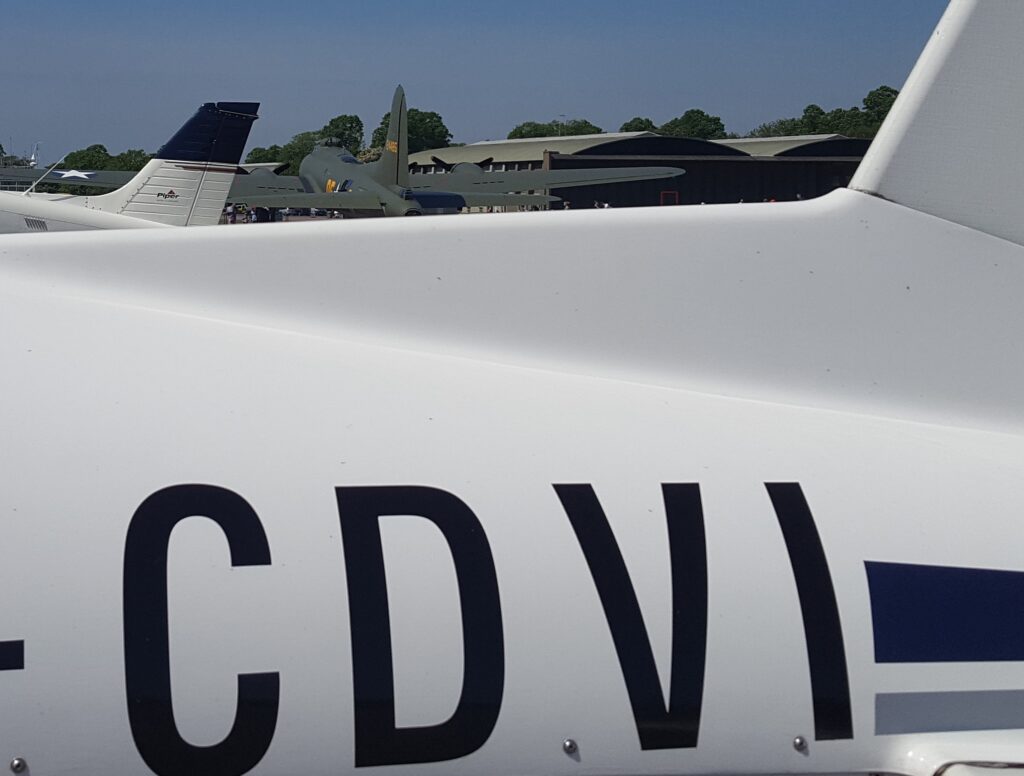 Shutting down as normal, I exited VI on the eastern apron and thought, ‘okay, where now?’. My only gripe about visiting Duxford is that the instructions on what to do once you exit the aircraft are not clear. I had to ask the occupants of the next aircraft parking where to go (thankfully they had been before).

Payment for your landing fee is made in the museum shop, at the front desk. There was no need to go to the yellow ‘C’ as you usually would. If however, I had not received their advice I would have walked back up the taxiway to the control tower marked with the yellow ‘C’.

However, due to the museum and the visitors, there is a fence preventing access and a coded gate with a keypad. The two people I asked for help happened to know the code. I shan’t publish it here but if there’s no one around, check it is not written on the gate (apparently it is) and failing that, make your way to the usual yellow ‘C’.

To reach the other side of the fence, unless you feel spritely enough to vault (probably best not), you need the code for the gates. If you don’t acquire this through other means I assume you can get it from the control tower where the yellow ‘C’ is located as mentioned.

I made my way to the museum shop (which was the ultimate destination for my trip anyway!) and had to ask a few people where to make the landing fee payment, which cost £18. With that you do get access to the museum which is great and you are then free to roam and explore. I stayed to explore the shop, make a few purchases, spent a penny and went for a coffee and cream tea in the café before making my way back.

I was lucky to get a front seat row of an air display before departing and got a good view of the 2-seat Spitfire as some lucky fellow got a go. 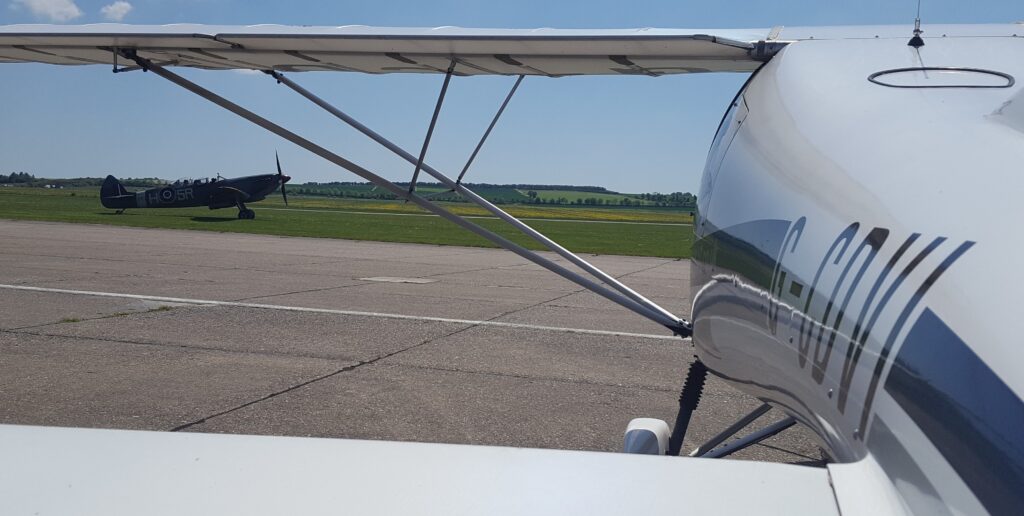 Getting back to Popham was just as straight forward. I got into VI, checks and start-up done before calling Duxford Information to state where I was, where I was going to and that I was ‘ready to taxi’. I was then given instructions to taxi to holding point Charlie. If you read the PDF in the link mentioned it will say that these initial holding points are intended for engine checks. Another cruise along the flight line, I arrived at Charlie to perform my engine checks. I then reported ‘ready for departure’. The FISO instructed me to head for holding point Delta which was the entrance to runway 06 hard. Watching and listening to the arriving traffic, I knew there was a clear space and Duxford called me up while taxiing to ask me to ‘report lined up on 06’. Once there, I did so, and was given ‘take off at your discretion’. 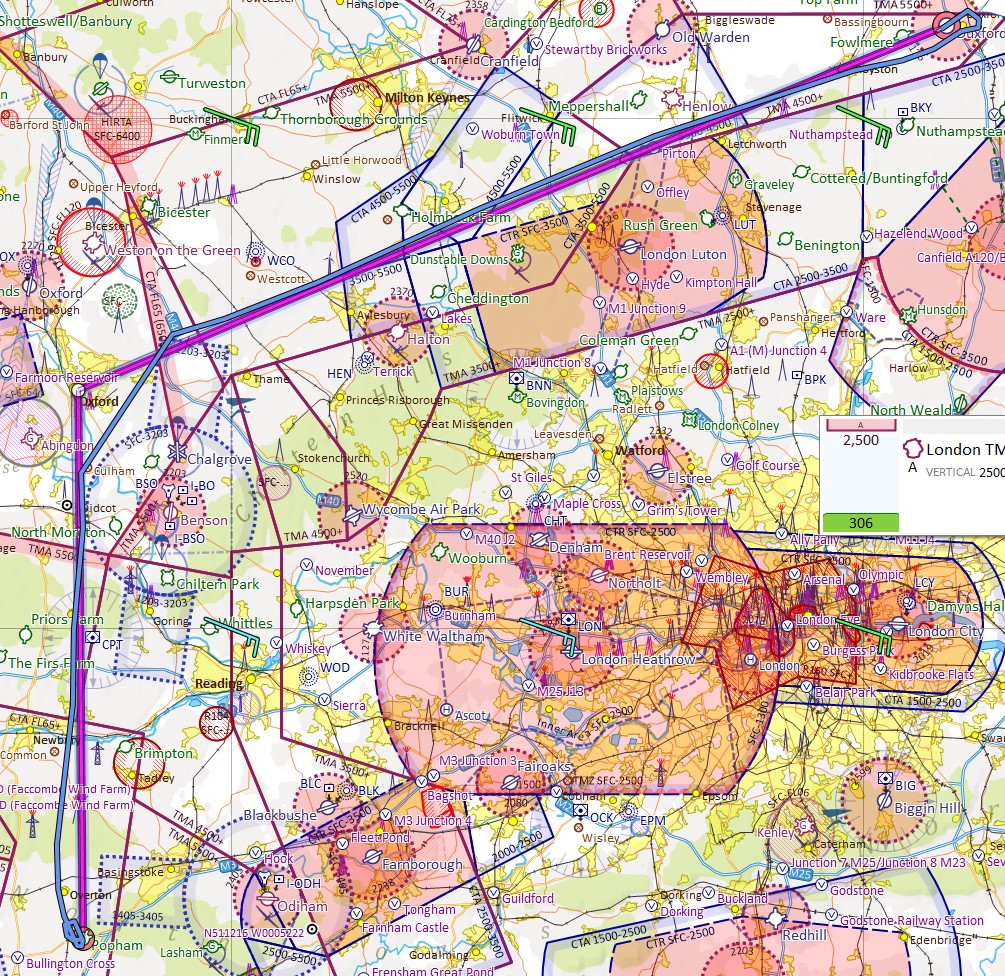 All that runway and you don’t get to see much of it as the C42 takes off too quick! I followed the pattern around and exited via the downwind leg keeping a careful eye out for joining traffic.

I received a service once more from Luton radar and then Brize radar until I was 10nm out from Popham. The Brize controller, spotted that I was skirting around Benson’s MATZ and called me to let know that if I wanted to cut the corner and dive in I could. Hence the sharp direction change and a ‘chip’ taken off the corner! At that point the thermal activity had become rather sporting which made it feel like I was taming a wild horse than enjoying a pleasant ride in a C42. It really was very bumpy indeed!

An excellent trip that really was something special. I highly recommend it but prepare yourself for some careful planning, avoiding airspace plus a busy and unusual circuit environment at Duxford. I also found it useful to watch a few YouTube videos beforehand to give myself a bit more awareness and set my own expectations. That really did help, especially regards to what to expect from the comms.