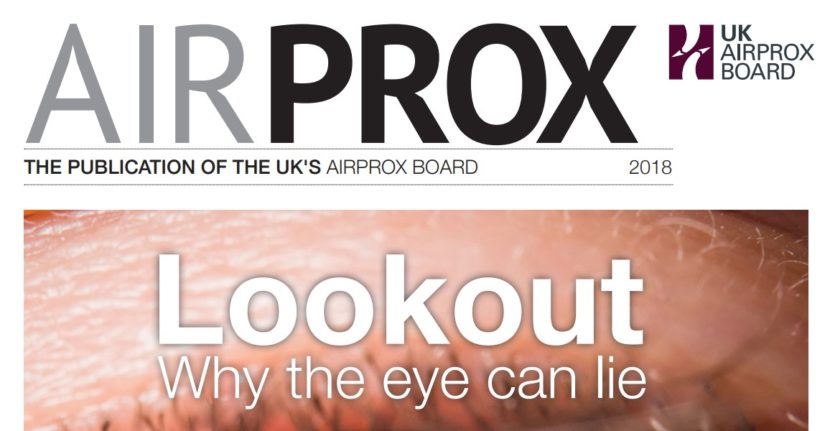 Most of us probably know about or have heard of the UK Airprox Board. What you may not know is that they do an annual magazine. I recently came across the 2018 annual report and within it there’s an excellent section about the human eye.

When learning or hearing about near misses or even air accidents, maybe you’ve even yourself, have you heard the following words uttered:

I just didn’t see it!

Said every pilot involved in an airprox …

Well, it actually turns out there are some genuine scientific reasons why that is the case. Having read the article I came away saying ‘wow’ and learnt quite a bit. We’re not going to go into every detail here, you can read the 2018 UK Airprox magazine, which is free, at your own leisure but I certainly recommend doing so.

Are you aware that your eyes cause you momentary blindness called ‘saccades’? Imagine sitting on a picnic table outside the clubroom at Popham (or your own local airfield) on a warm summer day, gentle 10 knot breeze blowing straight down 26 (why are you not flying?!) and you watch as an aircraft takes off. As your eyes track it, the movement will be very smooth following the aircraft’s path along the runway.

Now imagine the same scenario, but there is no aircraft taking off. Imagine you are tracking an imaginary aircraft along the runway. As you move your eyes it is impossible (while remaining in focus) to smoothly track your eyesight. Your eyes will move in small jerks, rapid and short eye movement of 20 to 200 milliseconds. You can try it now, most of the time we’re not aware of it but if you concentrate on observing that rapid motion it’s easy to understand.

When in saccade, your brain pauses vision and your brain will not register any new movement during that time. The same thing happens when blinking. Each movement presents a snapshot of what you see until it is updated a moment later. Now imagine you are flying and there’s an aircraft moving relative to you during a saccade on a relative bearing you are unlikely to see it until that aircraft – is rather large in your field of view!

This is why we are taught, during our lookout, to stop for a second or two when moving our eyes around the sky.

In fact, because of this arrangement of cells in our eyes is why fine detail is centred around the very centre of our eye line, around a thumbnail size area when held out at arm’s length. Try reading a car number plate by moving your point of fixation one car width to the side (example taken from the magazine).

Not only is there a very small area in which our eyes define detail but in order to do so requires a few moments of looking at that point statically. Meanwhile, the cones in the periphery of your retina start being dominated by motion detection during the daytime. Peripheral vision detects motion which is brilliant if the object isn’t another aeroplane on a constant and consistent relative bearing.

Not only all that – but due to a small hole at the back of your eye through which all the nerves exit to head toward your brain, there is an area with no rod or cone cells to capture light. This area of blindness is around 12.5° from central vision and falls to the right in the right eye and left in the left eye horizontally. The eye naturally fills this gaps with whatever is around the edge so we don’t even notice it. However, when looking ahead, one eye covers the spot of the other through peripheral vision.

However, if you move your eyes without moving your head, they don’t cover each other’s blind spots. Which is why, when maintaining lookout, you move your head around with your eyes.

How to perform a better lookout

Taken from the magazine, the following wrapped it up nicely, taking all this information into account:

The first step is attitude of mind. If I think it’s unlikely there’s an aircraft there then the temptation is not to expect to find one and therefore not to look properly. So when looking out, absolutely assume there’s someone out there. Next, look in the area of sky the threat is most likely to be. In normal flight, most of the risk of a mid-air collision can generally be reduced by scanning an area at least 60° left and right of the intended flight path (although it’s important to acknowledge this doesn’t mean the rest of the sky should be forgotten). At least 10° above and below should also be searched. Simply, the more, smaller saccades and attentive fixations the better. Move your head, too, as you look along your zone of horizon to ensure no blind spots.

An interesting and fun little test

One of the most interesting aspects of the magazine is a demonstration of the natural blindspot which I found fascinating and quite ‘eye opening’ (pardon the pun). You can find the below in the magazine too.

Fascinating, right? An interesting and simple test that highlights the different aspects described in the magazine’s article. Of course, the article goes into some more detail and I do encourage you to read it. It’s certainly going to make a difference to my lookout when I’m back in the air.